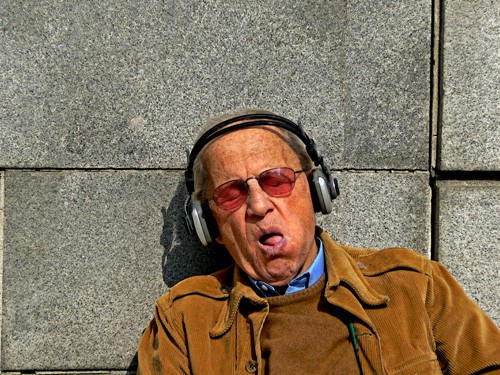 Sometimes you just have to lie down to listen. Especially if you’re old. Flickr/Lew (tomswift) Holzman

We all know 2016 was a banner year for podcasting. It seemed like every day, a whole trove of new shows dropped on iTunes. An embarrassment of riches to be sure.

The question I get asked most often in my line of work (apart from “Can you introduce me to Ari Shapiro?”) is “Are there too many podcasts?” And my answer is always the same — Are there too many books? How about movies? Should we have less music in the world? WHAT KIND OF FASCIST ARE YOU?!

Sure, the podcasting landscape can feel overwhelming and crowded and you might be getting stuck on what to listen to. But that’s only because so much has sprouted in such a short period of time. Our garden is going gangbusters and it’s all we can do harvest this bounty before the frost. (See below)

At The Big Listen, we try to make the wide world of podcasting a little more manageable. It is in that spirit that I humbly present to you our list of favorites from 2016. Whether they are the best moments of digital audio is up to you to determine. But they are the episodes that stuck with me long after I pulled my earbuds from my ears and put my phone down.

LISTEN TO THESE EPISODES IF YOU KNOW WHAT’S GOOD FOR YOU:

This podcast from Eric Marcus, Sara Burningham and Pineapple Street Media is a compilation of oral histories Marcus recorded with everyday LGBTQ heroes in the 1980s and ’90s. As Making Gay History so expertly shows, the human voice is breathtakingly powerful. I found all of these interviews to be soul-stirring, but particularly the one with Mr. Sayers. He was a deeply closeted black man who as a child in the 1920s was sent to the Mayo Clinic to figure out why he wasn’t like other boys. Sayers later went on to have a successful legal career, despite being branded a homosexual. To know that there was a time when doctors would diagnose homosexuality as an incurable illness, and that people could overcome that stigma, is both devastating and inspiring.

In The Dark: “Stranger Danger”

You can’t throw a stone these days without hitting a true crime podcast. Thanks, Serial. But if there’s one you choose to invest some time in, make it In The Dark from APM Reports. Reporter Madeleine Baran and producer Samara Freemark doggedly recount the story of Jacob Wetterling, an 11-year-old boy who was kidnapped and killed in a small Minnesota town in 1989. But this isn’t a prurient exposé of a crime against a child. It is the story of the chilling knock-on effects the murder had on a nation. This particular episode details the how the crime led to the passage of the nation’s first sex offender registry and how that registry has had unintended consequences for communities around the country.

Politically Reactive: “Dave Zirin On Loving And Hating The Olympics”

It needs to be said that I love Dave Zirin. With a deep and abiding passion. If I cared more about the optics of such things, I would be concerned. But I don’t, so I’m not. Dave is a sports writer at The Nation and the host of the peerless podcast, Edge of Sports (listen to this now). Over many years, he has crafted a career at the precise center of the intersection of sports and politics. Politically Reactive, hosted by comedians W. Kamau Bell and Hari Kondabolu, lives at the intersection of comedy and politics. And the three of them together talking about the Olympics, my longtime frenemy, is a podcast dream come true.

It was only a matter of time before the reality television genre permeated the podcasting realm. But lucky for us, it was the CBC that busted open the form, not some trashy production outfit. Sleepover is reality radio in that it invites three strangers from all walks of life to have a hotel pajama jammy jam with host Sook-Yin Lee. Each of the guests has a problem he/she is grappling with — love, loss, loneliness, etc. And each person gets a chance to unpack his/her challenge with the group, like Judy’s search for love and connection as a disabled senior. The result, especially in the selected episode, will renew your faith in humans and our boundless capacity to love.

Much of Andrea Silenzi’s delightful podcast from Panoply, Why Oh Why, explores dating and relationships in a digital age. Naturally, that means interrogating the ways in which we connect, or don’t. To that end, many of the episodes seamlessly stitch together fact and fiction to create a composite sketch of romance in the 21st century. But not so with this particular episode. In “How Will I Know,” Andrea walks us through a breakup…her own. It’s an intimate portrait of love and loss that at times is deeply uncomfortable to hear because of how closely it cuts to the bone. Which is the precise reason you should listen.

The Supreme Court is hot right now. With the death of ultra-conservative Justice Antonin Scalia, the Senate’s stonewalling of President Obama’s nominee, Merrick Garland, and the questions swirling around who will be President-Elect Trump’s pick to fill the vacancy, the nation’s highest court is very much in play. So the Radiolab spin-off couldn’t come at a more perfecttime. “The Imperfect Plaintiffs” delves into two cases where the plaintiffs were less than ideal, but whose legal battles served as the perfect test cases for laws that activists felt needed to be challenged.

No one is more surprised by how much I love this show than me. I can’t stop listening (thanks, Auditors). And I’m certain that apart from the hosts’ moms, I am their oldest listener. No matter. The conceit of the show is this: the hosts, Bobby Finger and Lindsey Weber, decipher the “whos” (unknown, or desperate-to-be-known celebrities) from the “thems” (celebrities with status and cachet) for listeners. The result is an epic ride on the Shadeville Express, where Bobby and Lindsey skewer (and at times celebrate) the absurdity that is celebrity culture. Like a no-name television actor coming out as straight. Or a Christian self-help author coming out as a lesbian (see: “Glennon Doyle Melton?”)

Historically Black: “Tracking Down A Slave’s Bill of Sale”

In September 2016, the Smithsonian National Museum of African American History and Culture opened to great fanfare on the National Mall. To commemorate its opening, APM Reports and the Washington Post collaborated on a podcast featuring stories of everyday African American families as told through the objects they held dear. In this episode, James McKissic, the descendant of a slave named Wilson Woods, tracks down his ancestor’s bill of sale. The original 1862 document lives in a courthouse in rural Tennessee. It’s a powerful exploration of the legacy of slavery for one African American family.

Candidate Confessional: “Michele Bachmann On Her Run For The White House”

Every political race yields more losers than winners. And those losers often have great stories to tell from the campaign trail. That’s the premise of Candidate Confessional from the Huffington Post. Former Republican representative and presidential candidate, Michele Bachmann, has more than a few tales from her failed run. Most of them have to do with the sexism and misogyny that dogged her during her campaign. Like when a Newsweek photographer used a wild-eyed test shot of Bachmann for a cover image. Regardless of your political leanings, it’s hard not to be moved by her story.

Making Oprah: “You Get a Car!”

My friends have gotten so tired of me talking about this podcast any chance I get. But that’s because IT’S. SO. GOOD. Our pals at WBEZ put together a delightful and engaging documentary about the Oprah Winfrey Show to celebrate the 30th anniversary of the show’s arrival on the daytime talk show scene. The best episode by far is the final one, which delves into the making of the big car giveaway in 2004. In meticulous detail, listeners learn just what went into making Oprah’s show the greatest thing on T.V. at the time, and why the size of the bow on the present really matters.

Leave A Message After The Tone:
“If You’re Reading This It’s Too Late Go To Bed”*

The world deserves more quirky, weirdo podcasts. This little gem about voicemails fits the bill. The hosts ask listeners to call and leave messages in response to specific prompts — What does Donald Trump eat?, or What is Drake’s bedtime routine? Then the responses are stitched together into little five-minute audio amuse bouches for your listening pleasure. In the Drake episode, listeners posit that the Jewish Canadian hip hop star ends his evenings with a night guard for his teeth-grinding and lots of lotion. More please.

Special thanks to my number one run commuter, Jacob Fenston.