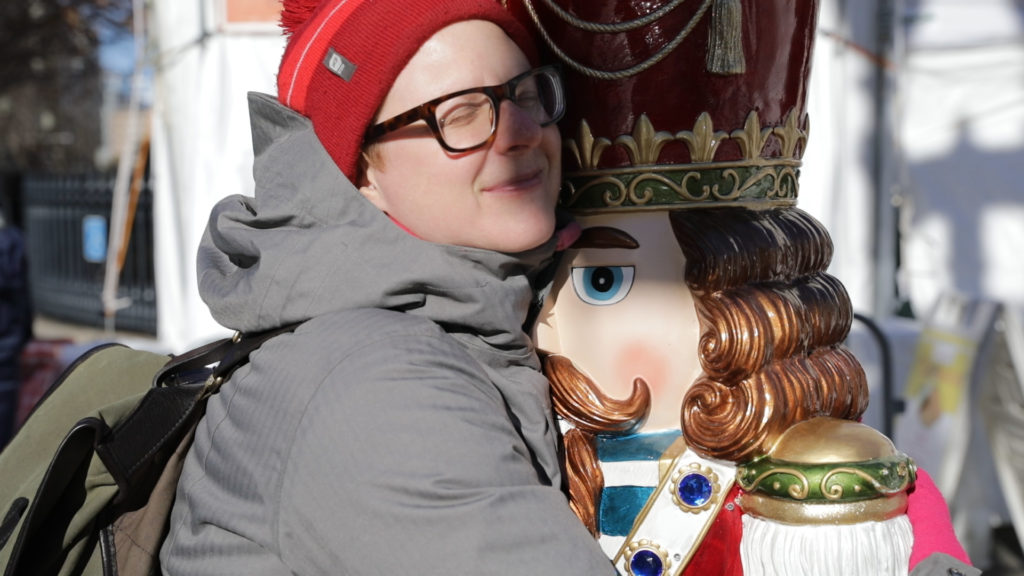 We hugged every nutcracker in Washington, D.C. on our journey to hear what you put your ears on in 2017. Tyrone Turner

Oooh boy, 2017 has been quite a year. Donald Trump was inaugurated as the United States’ 45th president, devastating hurricanes hit Texas and Puerto Rico, and there’s been a massive uprising around sexual harassment and assault in the workplace.

For anyone looking to take a break from the news, podcastland was lousy with options. Listeners binged on the lush Southern gothic S-Town, as well as on one man’s quest to uncover the mystery of his workout guru’s withdrawal from the world in Missing Richard Simmons. (Though you won’t find either of those podcasts on this list.) 2017 also brought us prestige series like Dirty John, Heaven’s Gate and Mogul.

It was an embarrassment of riches, to be honest. So many new shows dropped that it’s hard to even think about summing up my favorites. But we’re going to try. Lord knows there’s no shortage of podcast listicles populating your social media feeds this time of year (there’s even a listicle of podcast listicles!) but this best-of is a little different.

Here are my picks (in no particular order) for the nine best new podcasts of 2017 that we covered on The Big Listen. Happy listening! Oh, and if you disagree, let us know: 202-885-POD1.

This slick, fictional series about Chicago’s mostly-black Bronzeville neighborhood in the 1940s flew largely under the radar this year. But it’s certainly worth a listen, and not just because legendary actor Laurence Fishburne is in it. It follows the lives of Bronzeville’s illegal lottery players, but also chronicles the neighborhood’s self-sustainability. In addition to Fishburne, the series features Omari Hardwick, Tracee Ellis Ross and Larenz Tate, who also serves as co-producer. Bronzeville is a very modern take on the radio dramas of yore.

Do you remember what you were doing when you heard about Columbine? How about the Oklahoma City bombing, or the car crash that took Princess Diana’s life? Have you ever stopped to consider what other things were happening on these important days in history? KUOW’s How’s Your Day? explores the life that was happening while our collective attention was focused elsewhere. It’s poignant and ambitious and will make you think.

When the writer Alex Kotlowitz was asked to teach a creative writing class at a correctional facility outside of Chicago, he wanted to make sure that his inmate students didn’t just write about how they were wrongly accused or how terrible prison was. So he gave them a prompt: Write about your cell. The resulting short stories were then read by voice actors and turned into a podcast from WBEZ. Like its cousin Ear Hustle, it’s an intimate look at life behind bars that will likely change the way you think about incarceration.

Walk into the self-help section of any bookstore and you’ll be overwhelmed with the selection. There are countless books dedicated to fixing our broken lives. Kristen Meinzer and Jolenta Greenberg decided to see if any of them actually worked, so the pair read books like French Women Don’t Get Fat and The Life-Changing Magic of Tidying Up and lived by the books’ tenets for two weeks at a time. Naturally, hilarity ensues in this series from Panoply, but the show is also a commentary on the self-help industrial complex.

If you’re an ’80s baby, you’ll certainly remember the mellifluous voice of the man behind Reading Rainbow, LeVar Burton. His show spurred a love of reading in countless American kids. And now he’s back with a reading show, but for adults. In this Stitcher series, Burton turns his magical voice on short stories by both well-known and under-the-radar authors like James McBride, Haruki Murakami and Lesley Nneka Arimah. If you love a good story and/or are nostalgic for the simpler days of your ’80s youth, this is a show for you. But don’t take my word for it.

A few years back, The New York Times published an essay called “To Fall In Love With Anyone, Do This“. It was about the famed 36 questions that allegedly lead to love, according to psychologist Arthur Aron. This year, Broadway superstar Jonathan Groff and multi-talented stage performer Jessie Shelton brought the 36 questions to life in the form of a podcast musical. The short-run series from Two Up follows a married couple trying to mend a broken relationship using the 36 questions. The songs are totally ear-wormy and bonus: There’s a duck.

When mainstream media is dominated by similar voices, many stories don’t get told. This Gimlet show is trying to change that. Hosts Brittany Luse and Eric Eddings call themselves “blackness’ biggest fans” and this show is a testament to that. They present stories about black culture that have for the most part gone untold, from the history of the du-rag to the food enslaved African-Americans ate in the antebellum South. It’s an honest and engaging look at the culture from people who spend a lot of time thinking about it.

This amazing 14-part series from the Center for Documentary Studies at Duke University tries to unpack the meaning of whiteness. It particularly focuses on the last 600 years or so of history in this landmass we call North America. Host John Biewen and his professor pal Chenjerai Kumanyika dig into how and why race was created, the origins of slavery and white affirmative action, among other topics. This series should be required listening for all Americans, particularly those in positions power.

We mustn’t forget the recommendations of all the folks we accosted on the streets of Washington, D.C. Here are the shows they loved this year: