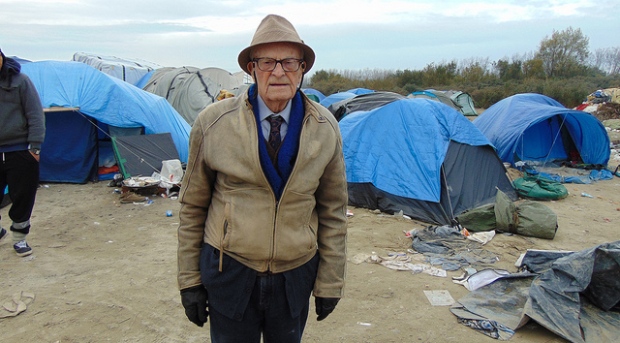 Harry Leslie Smith at a refugee and migrant encampment called Calais Jungle, in use from January 2015 to October 2016 in Calais, France. Caroline Gregory

Harry Leslie Smith was born into poverty in the north of England in 1923. In the years that followed, the global Great Depression put 2.5 million Britons out of work, including Harry’s father. So at 14, Harry struck out on his own and never looked back.

Now nearly 95, the WWII veteran is trying to sound the alarm bell about the rise of global fascism and the collapse of the welfare state. And he’s doing it with a podcast called  Harry’s Last Stand.

Harry is also kind of a Twitter star. At more than 150,000 followers, might be the most followed nonagenarian in the social media universe.

Do you have a podcast recommendation you’d like to share with us? We want to hear it! Give us a jingle on the Pod Line at 202-885-POD1 and leave a message. Then we’ll put you on the radio and hot spit, what fun that’ll be!