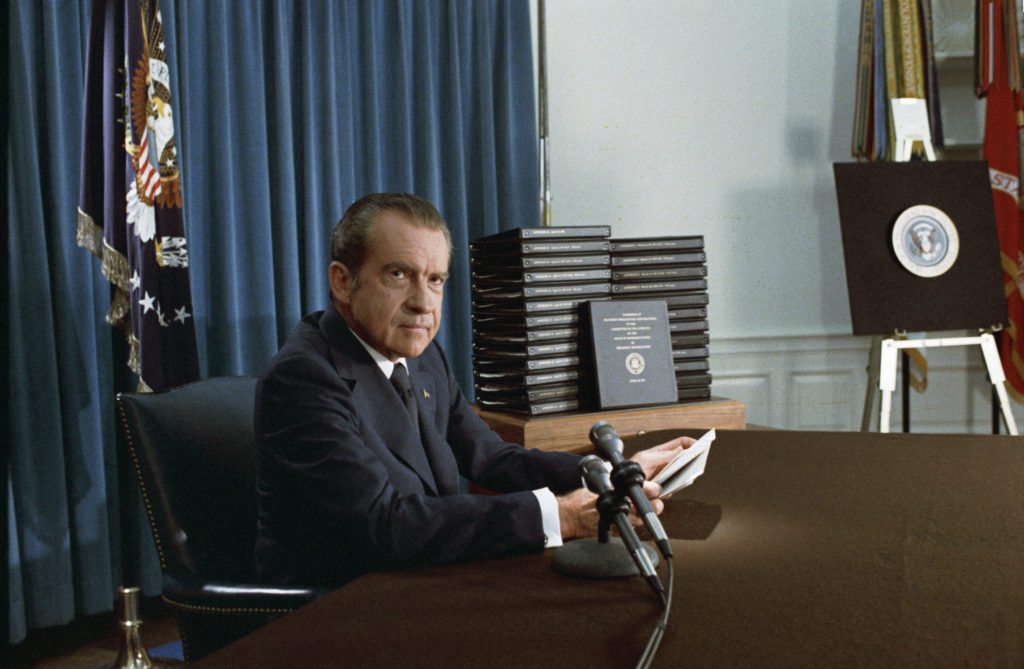 President Nixon with his edited transcripts of the White House Tapes subpoenaed by the Special Prosecutor, during his speech to the Nation on Watergate. National Archives

If you’ve been following American politics lately, you no doubt have heard comparisons between Donald Trump and Richard Nixon. They’re hard to avoid, especially as the Trump administration is under investigation for colluding with Russia. At the heart of both Watergate and the Russia investigation is election tampering.

That’s what makes Slate’s podcast Slow Burn so timely. It’s a show that looks back on the Watergate scandal through the eyes of the people who lived it, including former Congressional staffer Curtis Prins, former Senate investigator Scott Armstrong and veteran journalist Lesley Stahl, who recalled that in the early days of the Watergate affair, the media didn’t take it very seriously.

“As I covered the arraignments and so forth as this thing moved forward, I would run breathlessly from a courtroom with a tidbit I thought was stunning. And [Bob] Woodward was sort of egging me on,” Stahl told Slow Burn host, Leon Neyfakh. “I’d be out of breath because I had to run three flights of stairs and I had my high heels on and I’d get to the microphone and it would sound like someone was trying to kill me. And I’d deliver my little tidbit and years later I found out none of them were ever put on the air. They just went into a spool in the Washington bureau.”

This is just one segment from the whole show! Click here to explore the entire episode, including interviews with comedian Larry Wilmore, environmentalist Bill McKibben and the hosts of New Hampshire Public Radio’s “Powerline” series from Outside/In.